Round Heads and Square Necks, also the less common Ribbed Neck. Available in Steel, Grade 5, Grade 8 & Stainless.
A carriage bolt, coach bolt or round head square neck bolt[1] is a form of bolt used to fasten metal to wood.

It is distinguished from other bolts by its shallow mushroom head and that the shank cross-section of the bolt is circular for most of its length, as usual, but the portion immediately beneath the head is formed into a square section.  This makes the bolt self-locking when placed through a square hole in a metal strap, or a round hole in most wood. This allows the fastener to be installed with only a single tool, a spanner or wrench, working from one side. The head of a carriage bolt is usually a shallow dome. The squared section is of the same size as the diameter of the bolt shank, with a plain unthreaded shank.

Carriage bolts were developed for use through iron strengthening plates on either side of a wooden beam. It is commonplace though to use them to bare timber, the squared section giving enough grip to prevent rotation.

Carriage bolts are extensively used in security fixings, such as the Brenton Bolt where the bolt must only be removable from one side. The smooth domed head and square nut below prevent the carriage bolt from being unlocked from the insecure side. 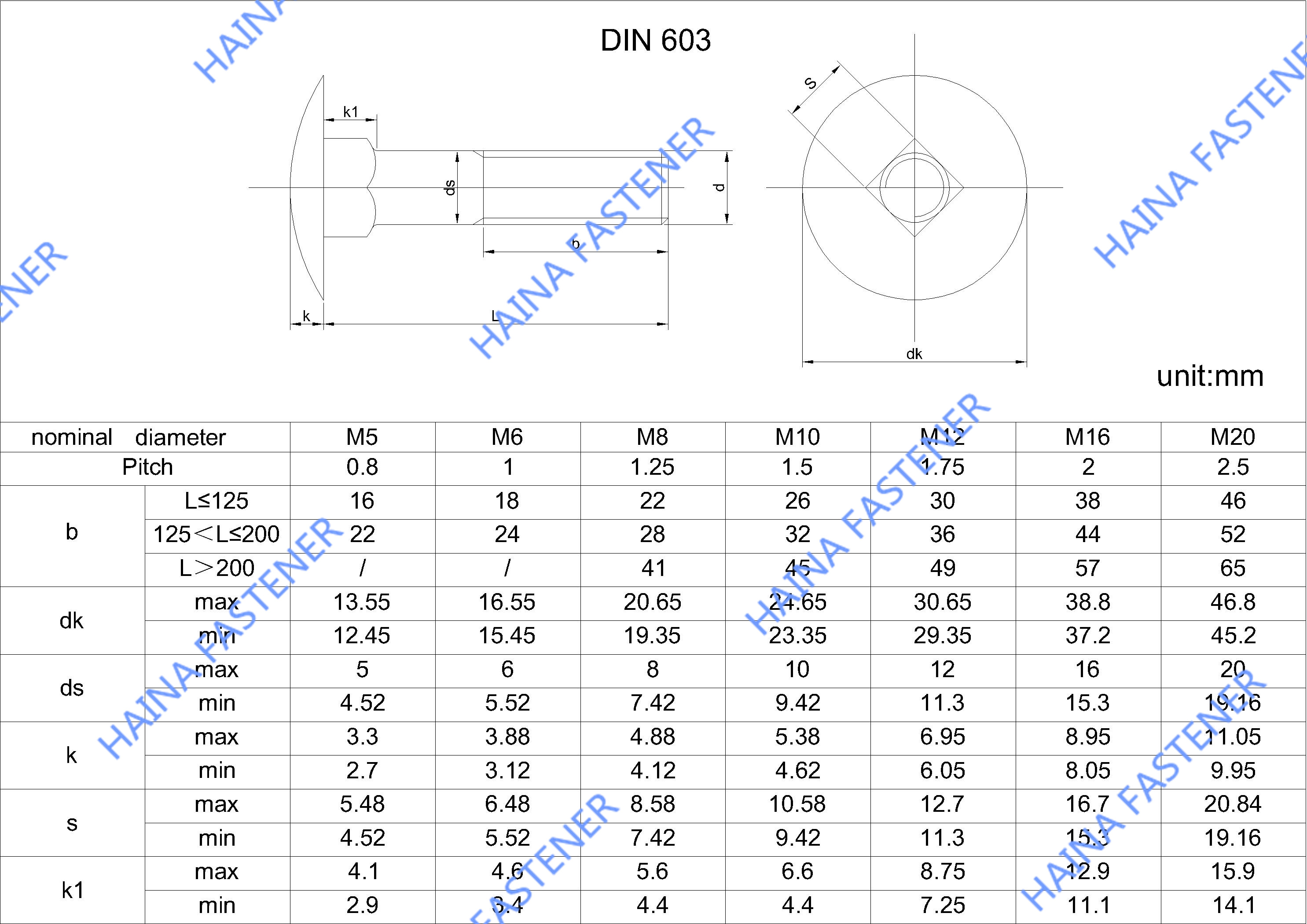 Carriage Bolts have a square shoulder under a round head and are used with a nut and washer.
· The shoulder of the carriage bolt pulls into the wood when tightening and prevents the bolt from turning
· Bolt length is measured from under the head of the to the tip of the bolt
· Carriage bolt lengths of 4" and shorter are fully threaded
· Depending upon the manufacturer, stainless steel carriage bolts over 4" may be fully threaded or have a smooth 2" or more between the head and beginning of threading
· Our stainless steel carriage bolts are available in both 18-8 and Type 316 stainless steel (for salt water exposure)
The design of carriage bolts allows you to install the fastener without a helping hand. Below the half-round head of a carriage bolt sits a squared shoulder. When you drill a hole through material sized for the bolt, the head of the bolt will remain in place while you tighten the fastener onto the material. Using a hole too large for the bolt will result in the bolt head spinning in the material. This will not allow the carriage bolt to tighten in the material.

When joining pieces of wood together using a carriage bolt, the square head on the bolt can become stripped in the hole, making them hard to tighten. To solve this problem, insert a few finishing nails in the hole beside the bolt before hammering the bolt into place. The nails will fill the gaps between the hole and bolt to keep it from spinning.

Do not drill the holes bigger in the wood parts. The idea with carriage bolts is that you pound them in with a hammer so that the square part under the head of the bolt is forced down into the tight hole in the wood. This provides the hold to a) keep the bolt in place during assembly and b) to keep the bolt from turning while using a wrench or socket to tighten the nut from the end of the bolt.

Carriage bolts are designed so that on one side of an assembly that there are no protruding bits for things to catch on. The rounded head will provide that as opposed to there being a hex or square head sticking out. In your case with a chair kit the general idea is that the heads of the carriage bolts should face toward the side of the chair where the user will be. As such the threaded bolt ends will want to be down underneath or toward a generally non used surface of the chair.